How to Guide: 'Umrah

Imam Ahmad reported that the Prophet (peace be upon him) said, "One Umrah to the next serves as an expiation for what occurs between them..."

Before making 'Umrah, it's best to familiarize yourself with the following important points. Click on the arrows for details.

There are five conditions which if met, 'Umrah becomes obligatory.


There are three pillars which must be fulfilled for a valid 'Umrah.


There are nine things which are impermissible while in Ihram.

The expiation for committing any of the above (with the exception of 1 or 2 hairs or nails) is to choose between the following;

There are two obligations that must be fulfilled for 'Umrah.

Iḥrām is the intention to make 'umrah.

It is made at the miqat for those passing by and from non-sacred ground for those close to Makkah.

These are for their respective inhabitants and all who pass by. 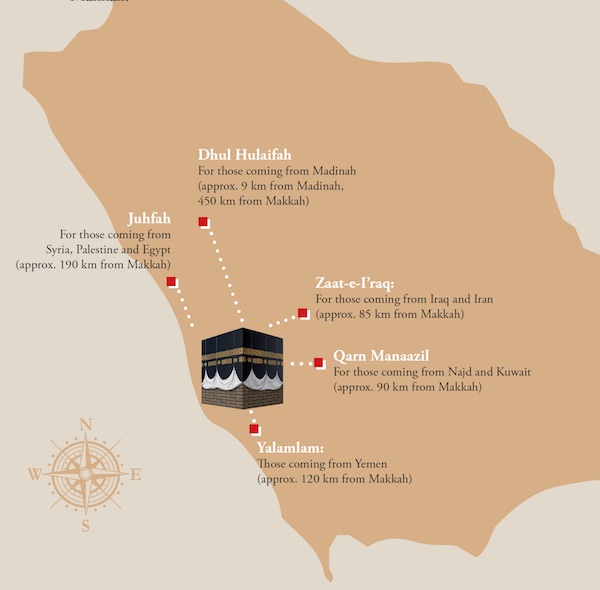 If it's not made from the designated location, a sheep must be slaughtered as a penatly.

Just before making ihram, the following are preferred:

1. Performing ghusl, or tayammum with an excuse.

3. Applying perfume to the body. PLEAESE NOTE: If you perfume your ihram wraps, you cannot put them back on if they are removed of fall off (if the fragrance is still present) due to it (applying perfume while in ihram) being an infraction. If you do, a penalty must be paid.

It is preferred that you enter Makkah during the day from its upper-most part (the north) and the masjid from the door of Banī Shaybah if possible.

When you see the Ka'bah, you should raise your hands and in a loud voice say,

“O Allāh, You are peace and from You comes peace. Our Lord grant us a life of peace."

"All praise is for Allāh, the Lord of the worlds, as He is deserving, in a manner befitting to His noble face, and mighty sublimity. All praise is for Allāh who has brought me to His house having seen me worthy of it. All praise of for Allāh in every condition. O Allāh, You have called to the pilgrimage of Your sanctified house and so I have come for that. O Allāh, accept it and pardon me, rectify all of my affairs, there is no deity worthy of worship but You.”

For men, tawāf is made with the middle of the top wrap under their right shoulder. 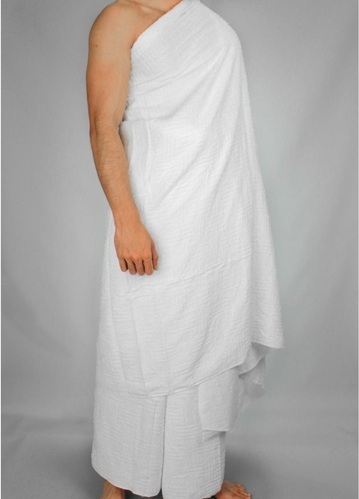 Begin at the black stone, facing it with the entire body, and then touch it with the right hand and kiss it.

If that is difficult, touch it with the right hand and kiss your hand.

If that is difficult, make a gesture to it.

Each time it is touched, you say,

“In the name of Allāh, Allāh is the greatest, O Allāh with faith in You, belief in Your book, fulfilling Your covenant, following the way of Your prophet Muḥammad."

Then with the Kaʿbah on your left side (going counter-clockwise), make seven rounds.

After praying behind maqam Ibrahim, if possible, you should touch the black stone.

Then exit through the door of al-Ṣafā. Climb upon it (it is not recommended for women to climb either mount if it will result in exposing their 'awrah in anyway) until you see the Ka'bah.

Face it and make takbīr three times by saying,

Next, descend and walk toward al-Marwā.

Men are to run when they are within six cubits from the first green marker until they reach the other marker. Running should be avoided if it will result in harming one's self or others. 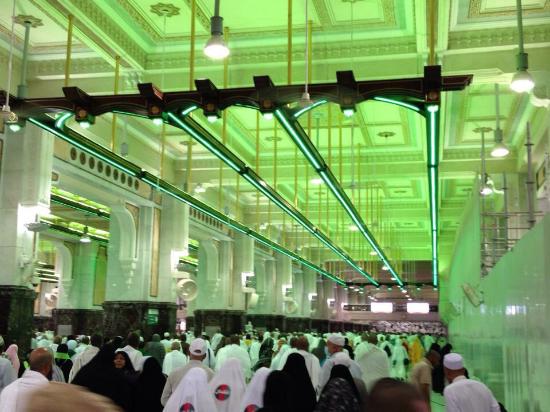 Next, climb al-Marwā and say what you said on al-Ṣafā.

Then, descend from al-Marwā and head to al-Ṣafā, walking and running in their respective places.

This is done at total of seven times.

During the laps you say,

“Lord, pardon and show mercy, overlook what You know, You are the Mighty and Honored.”

If you begin from al-Marwā, the first lap does not count.

During sa'i, both purification and covering are recommended.

Intention, continuity, and its occurrence after ṭawāf of the rites are requisites.

Now move on to the next step.

After completing the sa'i, men are to either shave their entire head or trim all their hair.

Whenever you wish to leave Makkah, you are to bid farewell to the Ka'bah with ṭawāf, which is voided due to menstrual cycle. If you remain behind or engage in trade, you are to repeat it.